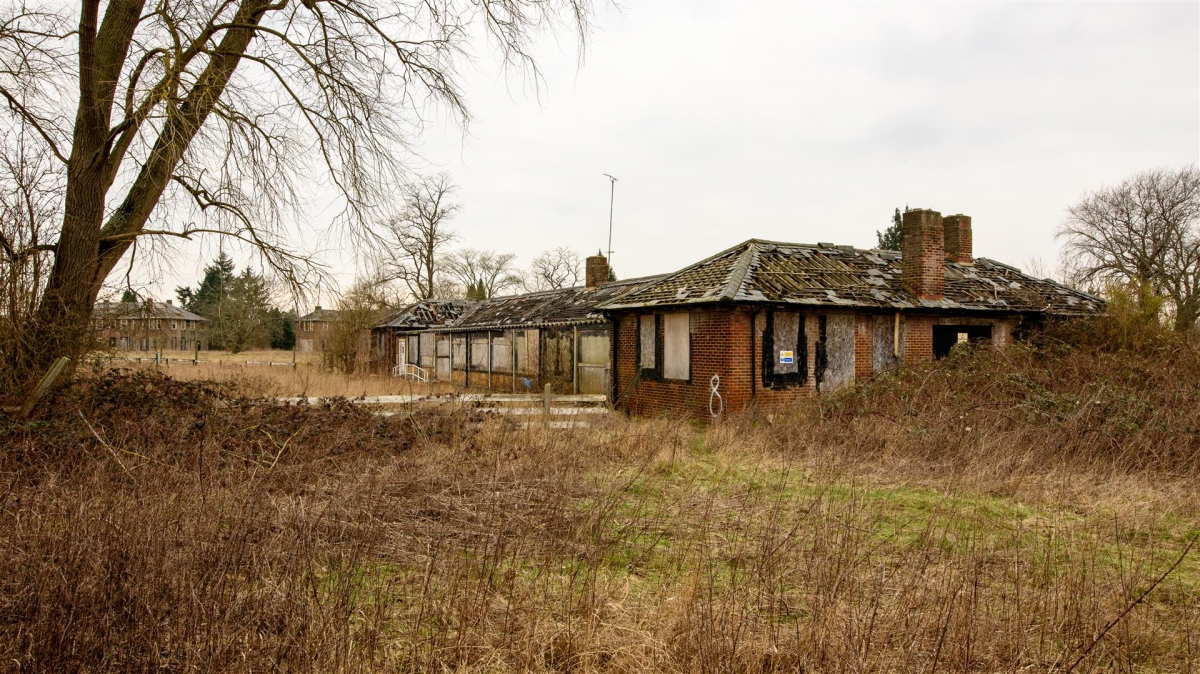 The Mental Deficiency act of 1913 created three categories of mental patients, they were imbecile, idiot and the feeble-minded and gave local authorities power to certify and segregate them from the local populace.  World War I interrupted any new building work and in 1919 the Middlesex County Council looked for old sites that could be used for a new mental hospital to act as a colony for the mentally deficieny. In 1924 the county council purchased Porters Park Estate, with a land total over 400 acres.  The estate was to become the site of both the Middlesex Colony for Mental Defectives (Later Harperbury Hospital) and Shenley Hospital. The land had been previously used as the London Colney aerodrome during WW1 – it was once the base of Albert Ball (1896-1917) and Edward Mannock (1887-1918), who were both star aviators of the Royal Flying Corps. Three of the aerodrome’s aircraft hangars remained on the site and these became incorporated into the new Colony.

In October 1928, the Hangers Certified Institution was opened, named after the three remaining aerodrome hangers on the site.  Eight male patients were admitted and put to work clearing out and converting the hangers into wards.  Soon eighty-six male patients lived and worked on the site. In 1929 construction of new buildings for both the Harperbury and Shenley hospital sites began. The new buildings of the Hangers Institution were arranged along three loop roads. The administrative building was at the front, just off Harper Lane.

The first of the new buildings opened in February 1931 and by December and 342 male patients were in admitted.  The administration centre, which ran through the middle of the site, contained administration, clinical rooms and a dispensary.  Alongside it were the kitchens, storerooms, workshops and laundry.  These central services area was flanked by one or two storey villas for male patients on the east side, and for female patients on the west side.  The De Salis Recreational Hall (named after Sir Cecil De Salis, Chairman of the Council’s Mental Deficiency Committee) could seat 700 people and was equipped with a stage and a cinema projector.  A Nurses’ Home was built to the west of the administrative building.  The Medical Superintendent’s residence was an 18th century farmhouse – Wild Farm – located in the grounds of the Institution.  The site also contained tennis courts and sports grounds.

Once the new buildings were completed in May 1936, the Institution was renamed Middlesex Colony and the facility was officially opened by Minister of Health Sir Kingsley Wood.  Middlesex Colony was designed to house about 1,355 patients.  As with all Mental Hospitals, Middlesex Colony was intended to be as self-sufficient as possible.  It was planned that patients capable of working would be out to work at various tasks around the hospital with the male patients providing the labour for the farming ventures of the institution. Fruits and vegetables were grown and cattle, pigs and chickens were raised. Milk was even sold locally to the Shenley Hospital. Men also worked in workshops to provide needed goods for the hospital, such as clothes, shoes, brushes and upholstery/carpentry.  Female patients worked in the laundry and kitchens and helped keep the wards clean.

In 1948 Middlesex Colony passed from the control of the county council to control of the National Health Service. Eventually the territory around the institution fell under the jurisdiction of Hertfordshire County and still today lays within the Hertfordshire boundaries. Two years later the institution was renamed Harperbury Hospital. During the 1950s Harperbury had 1,464 beds. An annex at Hemel Hempstead had thirty more beds. The 1950s saw continued expansion at Harperbury and four more patient villas were built, as was a residence home for male nurses.  Around the same time, a department of clinical psychology was established to better assess mental handicaps. The school for pediatric patients was enlarged and an indoor swimming pool was built adjacent to it.  In the 1960’s a cerebral palsy unit opened at Harperbury where it provided services to mental health units throughout the area, as well as at Harperbury. As with a lot of hospitals at the time, overcrowding had started to become a problem and by 1964 severe overcrowding existed and 1,587 patients where accommodated in the hospital.  Despite this overcrowding, Harperbury continued to expand further and the Kennedy-Galton Centre opened to study clinical genetics, and to diagnose chromosomal abnormalities in the unborn. Towards the end of the 1960’s a new activity centre was officially opened to provide a stimulating environment for patients.  Up until the early 1970’s, Harperbury’s expansion continued where changes were made to use existing space better to ease overcrowding. The activity centre was expanded in 1973 and a new playground was added.

At the start of the 1970s ideas were in progress to start to integrate patients back into society and move away from a centralised system. Patients took part in day trips to visit the shopping areas at nearby towns. Along side this, they were also taught skills that would help them cope once they became a part of the outside society. They were prompted to take better care of their appearance and they were encouraged to participate in sports events at the hospital and to take part in various groups. Musical events were held at Harperbury and severely handicapped deaf patients were taught the Makaton sign language.  In 1973 the scaling down process began and the hospital farm was closed. In 1974 a discharge programme was set up to help patients integrate into the outside communities. Patients began moving out of Harperbury and into the outside world.

The Kennedy-Galton Centre was moved out of Harpersbury and into another institution in 1987. By the 1990s plans were in the works to close the local Shenley, Napsbury hospitals, as well as Harperbury hospital. Patients were moved out of all three that decade. However, in 1995 and 1998 Harperbury got a temporary influx of patients coming from two other institutions as they closed. By late 2001 Harperbury had only about 200 patients and Harperbury was officially considered closed.  A small specialist unit remains on site.