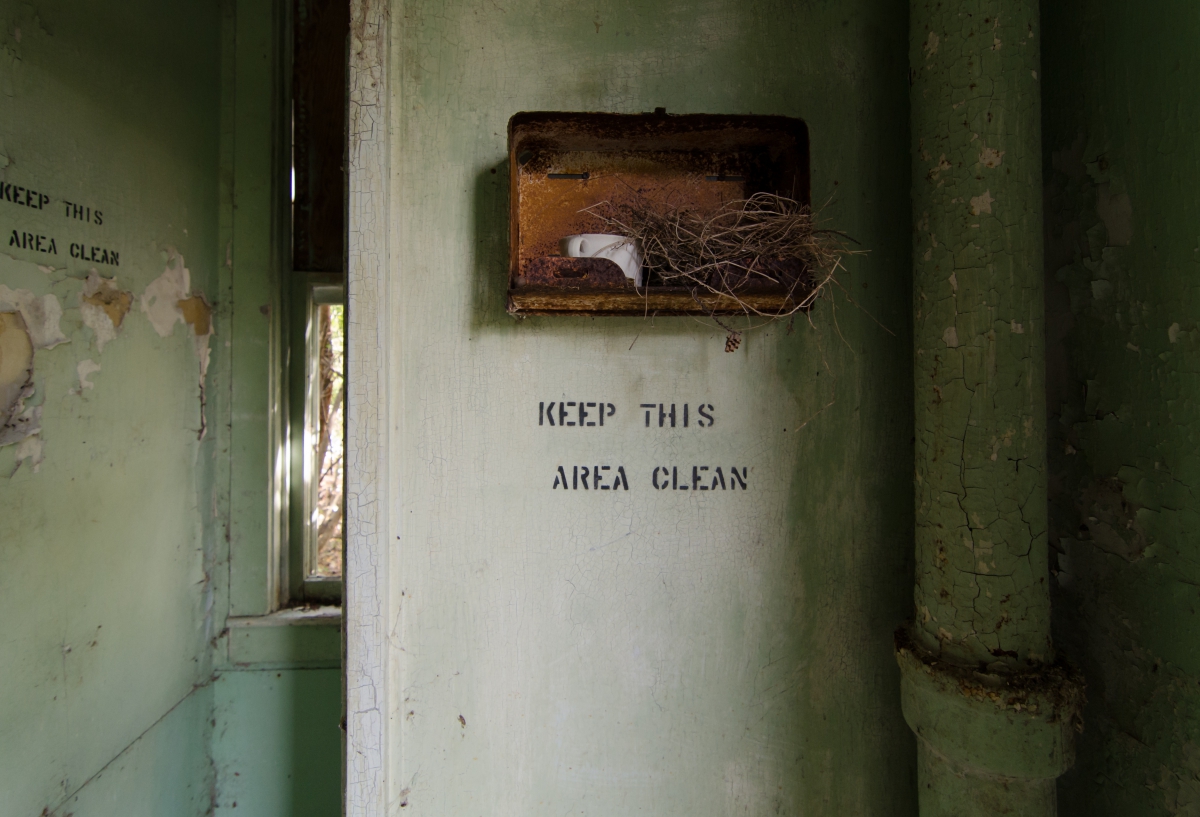 We were searching for a new beach on the Island of Eleuthera in The Bahamas when we found ourselves idly turning down one of the side roads off the Queens Highway. We didn’t know it at the time, but we had turned into an old US Naval Facilities Engineering Command & US AuxiliaryAir Force base (NAVFAC Eleuthera) that had helped to develop the SOSUS system and track missiles during the 1950’s. Eleuthera is a long, thin and sparsely populated island that sits on the boundary between the Caribbean and the North Atlantic Oceans; the island is filled with stunning beaches that are found at the end of unlikely dirt tracks and a 4×4 is essential. We hadn’t expected anything different as we drove down an road that was being reclaimed by the bush.

Driving onwards, we passed an old gate house and a handful of derelict wooden buildings hiding in the bush. We thought nothing of it initially as we passed similar buildings when exploring Cotton Bay earlier in the week. We only begun to realise we had stumbled somewhere different to what we expected when, rather than park up next to a beach, we found ourselves edging out onto a crumbling apron of tarmac and concrete. It seemed to large to be a car park for an island of less that 10,000 people. It turned out to be a simple way of collecting rain water.

Originally known as the “US Navy Experimental Facility, Eleuthera”, the base originated in November 1950 when Western Electric was selected to construct a demonstration SOSUS (Sound Surveillance System) installation on the island. This was part of the larger Project Hartwell initiated by the Americans and MIT.  Initially, the base consisted of a wooden Generator Building, a wooden Western Electric Laboratory building and a Communications Center which was little more than a tent. Six hydrophones were also installed at sea as part of the project. A few years later the US navy sent over a construction battalion, The Seabees, to established a more permanent base and five green huts consisting of administration, a galley and barracks were built.

In 1957 the Eleuthera Auxiliary Air Force Base (AAFB) begun operations as part of the Atlantic Ballistic Missile Test Range,  The Eleuthera AAFB was part of the Air Force Missile Test Center’s Atlantic Missile Range, which was used for long-range monitoring of rocket and guided missile launches, controlled targets, drones, satellites, and lunar probes for the Air Force, Army, and Navy.  The Eleuthera AAFB was the fourth tracking station in along the length of the test range and formed part of there MISTRAM system.

The base was supported by twenty contractor employees of the Radio Corporation of America (RCA) (the primary contractor for operation and maintenance of the site’s instrumentation, including the MISTRAM system) and Pan American Airways (PAA) (the primary contractor for management, engineering, operations, and maintenance) during the 1960’s and 1970’s, and Western Electric in the 1950’s.  Pan Am employed the support staff, whilst RCA employed the electronic technicians, engineers, and related equipment operators.  At its peak, 45 Bahamian employees also worked at the base.  The MISTRAM facility was part of Eleuthera AAFB.  The Air Force Base Commander was evidently the only military officer assigned to the AAFB.  The top PanAm employee had the title of Base Operations Manager, and the top RCA employee was the Instrumentation Manager. The MISTRAM system was superseded in the 1970’s and the AAFB was taken over by the NAVFAC.

Having discovered the concrete aprons and spotting more derelict wooden buildings hiding in the undergrowth, we decided to explore further. The quiet of the surroundings and the density of the bush were reminiscent of Pripyat in Chernobyl, as hidden around the edges and just out of sight were old fire hydrants, walkways and other signs of life. We scrapped the car around the heavily overgrown roads (we decided against walking because of poison wood and mosquitos) and came into another concrete apron in the middle of a cluster of buildings.  We still did not have any clue as to where we were, but we later found out that we had discovered the old Maintenance sheds, Weather Station, Diesel Generating Station and Control Centre for the AAFB. Our first clue to the what the previous life was, was the discovery of some paper work stating Pan-Am Guided Missile Range Division.

It was clearly evident that the metal fairies had descended and cleared the lot since the base closed. Every building was trashed, weathered and beautiful to photograph.  Still laying in place in the generator station were eight 200kW diesel generators and their associated electric switchgear. Half supplied by Westinghouse and the other half supplied by General Electric, their guts strewn across the floor.  Surely 1.6MW of power would have been useful to the islanders?

We decided not to hang around any longer as we could hear some heavy grinding from workers at the still functional water plant close by and we didn’t want to unexpectedly meet them. We did drive through a few days later to grab a few more photos as we were passing and stumbled upon a pile of forgotten telephone switchgear.