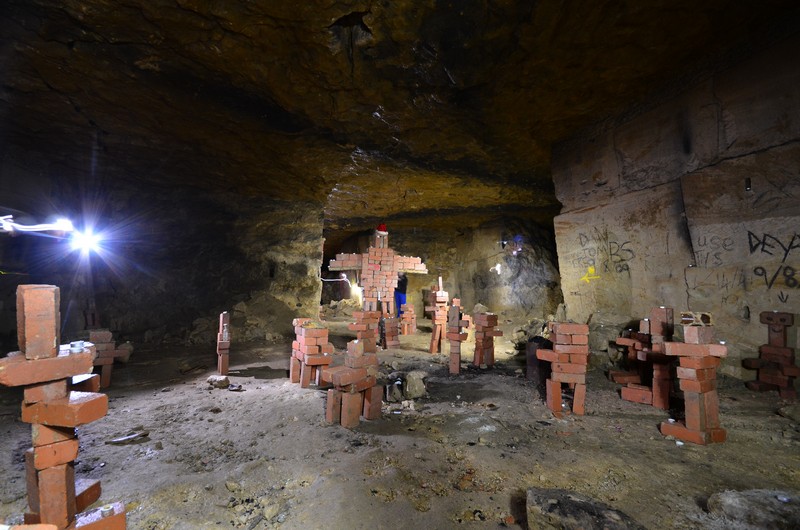 Box Mine is one of the largest Freestone Quarries in the Bath Area, it covers over 15 miles of under ground tunnels, dead ends, cranes and cross roads.  All of which looks very similar. Very, very similar. It is also a publicly accessible quarry and has a handily located pub right next door. This is unlike a large number of the other underground quarries in the Bath area which have been used for storage, or more ominously, MOD operations. We recommend you head to Google after reading this post and search for Burlington, and prepare to be amazed.

With this in ours minds and looking for something to do, we decided to join a group of friends and attempt to see the sites that Box has to offer. Nearly the entire group had never seen the quarry before, yet ourselves and RatsnRuins had the most experience.  Which wasn’t a great deal and accumulated to a few very quick whirlwind tours to see the tourist spots of Box.  This meant we were designated guides (and I couldn’t leave the Rat hanging by his tail). Armed with more torches, batteries and jaffa cakes than we could carry, we set off in the direction of the backdoor…

First up was the Cathedral. I set off pretending I knew exactly where I was going and started to lead the group. In reality I was following the scrawled directions on the wall that led us to the Cathedral.  Essentially this is a huge chasm that was mined vertically over 150 years ago, with the stone being hoisted 100ft up through the ceiling. After this, things begun to temporarily unravel and we managed to misplace the world around us.  Or less poetically, we were lost and had to relearn our lefts and rights. We had led the entire group down a dead end and when we tried to back track to where we thought we went wrong, we found another dead end.  At this point, hunched over a map, we collectively thought ‘oh shit’.  We had said to the pub that we would be out after4 hours, and with all the faffing in the cathedral, we had been underground almost 2 hours. So another panicked look at the map did in fact reveal we were lost.  With this, we back tracked again and realised at our age that we should know which was is left and which way is right.

We eventually found our way onto the main haulage route (B12) and set off in the direction of the ‘Robots’, which have been created from the remnants of old MOD bricks and are set in a massive crossroads. It is a random and comedic scene to discover when you are miles underground. Now on my last trip down Box over four years ago, the group I was with decided to cause a sacrilegious act and demolish a large amount of the robots.  We had a plan though.  And like most males, we were thinking big.  Giant Robot Big.  And four years later, it still stands, lording it over the minions. As we turned the corner, KingRat and I burst into a fit of laughter as The Giant cast its shadow over us!  Note: I think it has now be demolished!

Anyway, after a brief reunion and a spot of cheese and wine we set off into the dark again.  This time to see Brewers Drift and the red door of mystery, we also saw a few other little spots.  It was on our way out that we ended up lost again.  But this time, we were following previous directions on the wall and not our own senseless direction.  Both of which stopped dead and decided it was a good time to leave, abandoning and head for some chips. This was after we had all crawled over some deads and into the world muddiest cavern.  So we turned back, and then realised we should head back through the same way.  With a little toing, froing and minor flapping – whilst the rest of the group enjoying a quick and unexpected break – we finally found our way.

Which led to the pub, for a well earned bowl of chips and half a dozen double yokers.  Top stuff.

(You may notice the lack of photos, and for once, I wasn’t really taking any.  With the navigating, climbing and fretting, photos never cross our mind.  Next time, it will be a slow photo tour).

4 Replies to “Navigating Box Quarry – sense of direction not included”