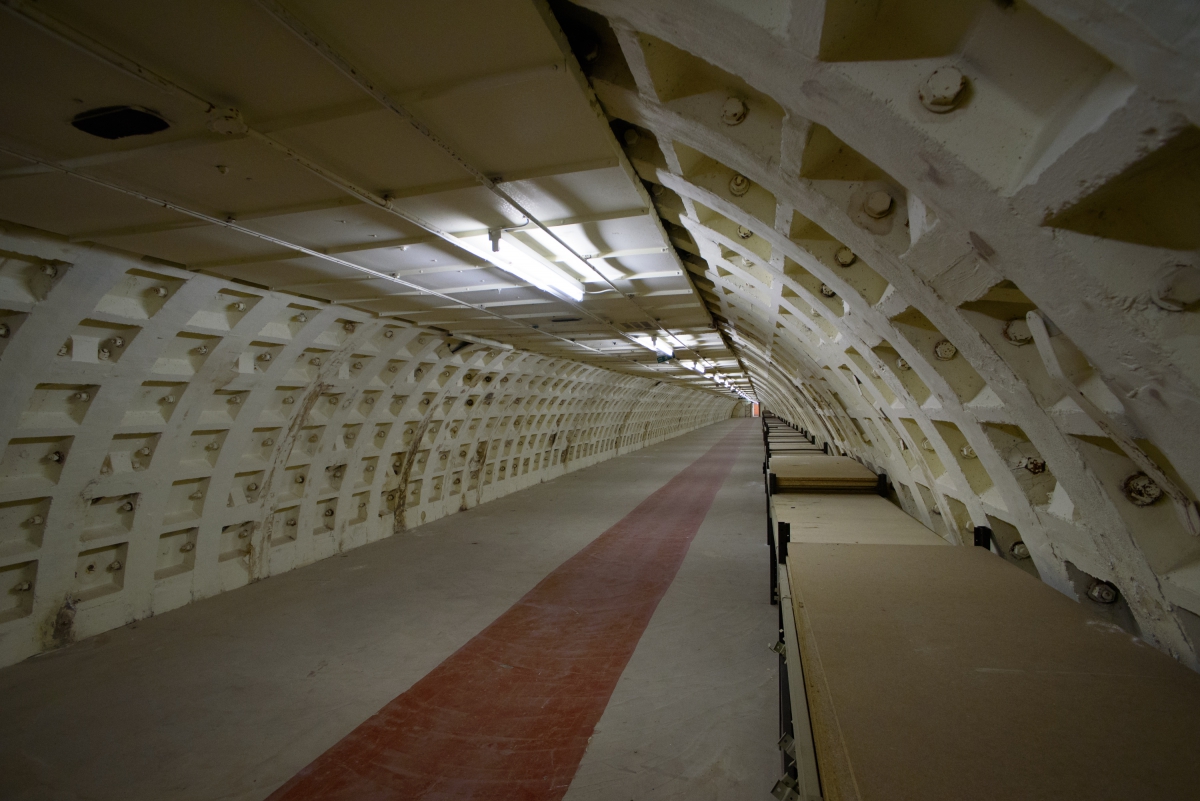 From time to time we are very lucky on here on TheTimeChamber as occasionally, someone we know drops us a line wanting to know if we would like to come and see something interesting, and normally off-limits. This has happened before when the Station Manager at Charing Cross Station agreed to show us the old Jubilee Line Platforms before they retired; this time it was to take part on a dress rehearsal tour of the deep level shelter beneath Clapham South station on the Northern Line. A big thanks to the Hidden London team for allowing us to join them, especially Paul for inviting us down in the first place. Clapham South is one of the eight deep level shelters constructed in London during World War II beneath existing underground stations. During the Blitz of 1940, a reappraisal of deep-shelter policy was undertaken and at the end of October the Government decided to construct a system of deep shelters linked to existing tube stations. Tube Stations at the time were already being used as makeshift shelters but this was seen as dangerous due to narrow platforms and live rails. The government decided that each shelter would comprise of two parallel tubes 16 foot 6 inches internal diameter, 1,600 feet long and divided into 2 horizontally that would be placed below existing station tunnels at Clapham South, Clapham Common, Clapham North, Stockwell, Oval, Goodge Street, Camden Town, Belsize Park, Chancery Lane and St. Pauls. London Transport funded the construction of the tunnels from public money and retained the option to turn the tunnels into a new express line running into London when the air raid shelter role was no longer needed. Clapham South opened on the 21st of October 1942 and provided accommodation for up to 8000 people across two levels, it had taken less than two years to construct the tunnels by hand but the Blitz was over by the time they were completed. However the shelter provided invaluable cover when the V1 & V2 bombs started to drop onto London in the later parts of the War. The shelter was closed at the end of the War but almost immediately in 1946 found use as a hostel for soldiers on leave. The shelter had various uses (including as a ‘hotel’ for the Festival of Britain in 1951) until it formally closed in 1956, and is most famous for housing Caribbean Immigrants who arrived in the UK in 1948 aboard the MV Empire Windrush (a former Nazi troop ship captured by the British at the end of the war) – notably about 1/3rd of its passengers were men from the colonies returning to re-join the RAF and among those were men of the calibre of Corporal Sam King MBE, who would later become the first Black Mayor of Southwark.  The shelter was then disused and on ‘care and maintenance’ until 1976 when the government leased them out to private tenants and Clapham South was taken on as a secure document storage facility until 1999 when the shelters were offered for sale after the data company did not renew its lease. TfL purchased the tunnels and in 2016 agreed to start running tours of the shelter through the London Transport Museum. Our tour started at the surface, where we were led down to met the Hidden London tour team and taken on our way. Two guides showed us around and explained the reasoning behind the shelter, how it was constructed and the various uses that it had after the War. We also discovered just how much Hidden London want you to stay on the beaten track, oops!

All in all a very interesting morning trip out, for more information or to book onto the – now live – tours visit the Transport Museum website here